Photos from Inside Grameen 2010

For a week in 2009 and again in 2010, we gathered an international group of social entrepreneurs, corporate leaders, and innovators in Bangladesh. We spent time getting under the skin of Grameen, the world’s best-known social purpose company, as the guest of Nobel Laureate, Professor Mohammad Yunus. 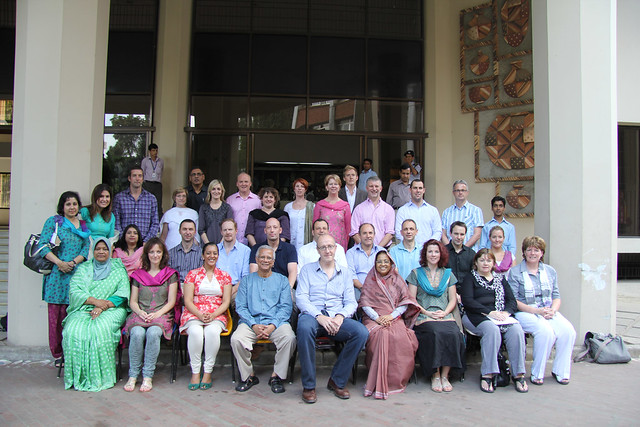 At Grameen’s HQ in Dhaka we dialogued with Grameen founder Professor Muhammad Yunus. We went to the villages to meet with the grassroots staff of the bank and its borrowers.

In Bogra, five hours north of the capital, we were guests of the Grameen Danone Foods Ltd. This joint venture is perhaps the world’s best-known collaboration between a large multinational and a social enterprise.

Inside Grameen was only possible because of the amazing hospitality, openness and generosity of spirit of our friends at Grameen and Danone. We thank you so much.

The Grameen Bank is a Nobel Peace Prize-winning microfinance organisation and community development bank founded in Bangladesh. Originating in 1976, it is the life’s work of Professor Muhammad Yunus. Whilst at University of Chittagong, he launched a research project to study how to design a credit delivery system to provide banking services to the rural poor. Based on his results, in October 1983 the Grameen Bank was authorised by national legislation as an independent bank. In 2006, the bank and its founder, Muhammad Yunus, were jointly awarded the Nobel Peace Prize. In 1998 the Bank’s “Low-cost Housing Program” won a World Habitat Award.

In 2011, the Bangladesh Government forced Yunus to resign from Grameen Bank, saying that at age 72, he was years beyond the legal limit for the position.

Grameen Danone Foods, popularly known as Grameen Danone, is a social business. It was launched in 2006 as a joint venture between Grameen and French food company, Danone. The yoghurt it produces has been designed to provide children with many of the key nutrients that are typically missing from their diet in rural Bangladesh.

Photos from Wavelength Connect 2018 On Your Marks event

Failures in our criminal justice system